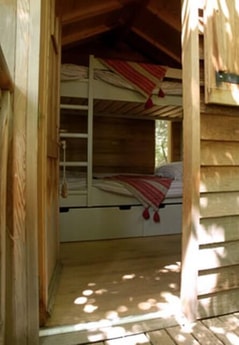 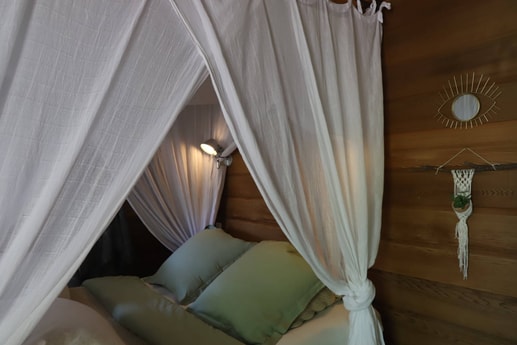 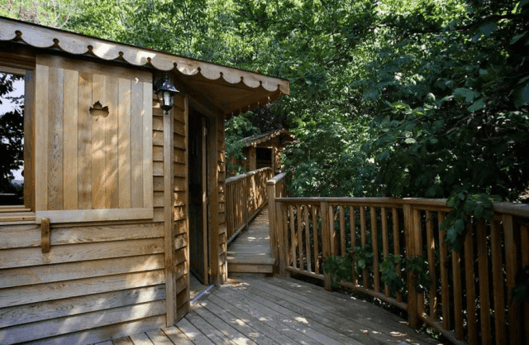 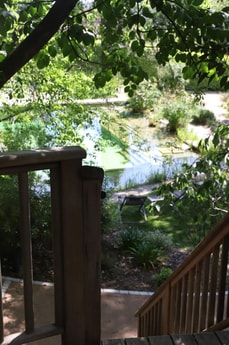 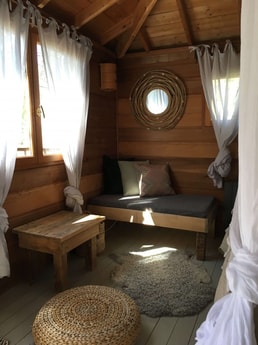 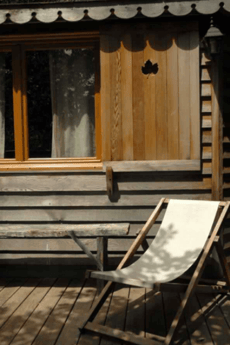 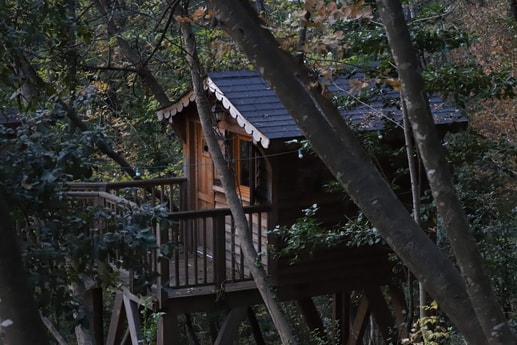 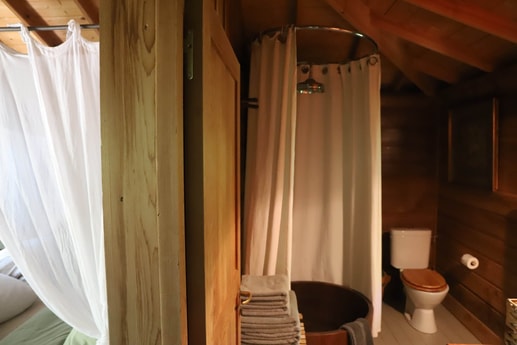 Two Treehouses in One

Our family treehouse for 4, one room for the parents, and attached a tiny cabin for the children!

Enjoy a unique tree house vacation with your loved ones at this specially-designed King Louie and Mowgli treehouse in Saint-Paul de Vence.

King Louie boasts a four-poster bed and is closest to the pool and the sauna.

This tree house is perfect for families with independent kids thanks to its connection with the smaller cabin Mowgli where children can live their own adventure!

Treehouse King Louie is a 20 sq. m. cabin (much like our treehouse Bagheera) with a double bed suitable for 2 persons and Mowgli is another 5 sq m cabin with bunk beds for max. 2 children.
The 10 sq. m. balcony is perfectly positioned to overlook the children in the swimming pool and offers a nice and shaded hang-out during the hottest hours of the day.

This treehouse has all the amenities guests need for a satisfying and comfortable stay. The main cabin (King Louie) has a double bed complete with linens, a fully equipped bathroom with flushing toilet, hot and cold shower, a heated towel rack and towels, and even a hairdryer.

The smaller cabin (Mowgli) has two bunk beds and is connected to the bigger treehouse by a walk bridge.

On the main terrace, there are two lounge chairs and a low table, the children have their own terrace.

The treehouse has a fully equipped kitchenette in which you can prepare all of your meals.

For those who want to get in touch with friends and family back home, there is a free-WiFi connection.

Children have to step outside of their own cabin and cross the walk bridge and their parents bedroom to access to the bathroom.

This treehouse can also be booked by couples without children of course.

Number of bathrooms: 1 Number of toilets: 1

Close to the airport Mountain views

Secure parking free of charge for all guests.

How to get there

Via the A8 motorway:

→ From the airport, you can take a taxi or bus (see below), or hire a car.

Nice is accessible by TGV direct from Paris and other major French cities and there is a shuttle service between Nice, Cagnes-sur-Mer, and all main towns along the French Riviera.

→ From the train station, you can take a taxi or a bus (see below)

→ Pre-book a transfer from the airport or railway station with our local taxi company: /

→ Or reserve a taxi from Nice Airport's taxi rank:

Bus n° 400 runs every 30 to 45 mins and links Nice city center / Nice Côte d'Azur Airport (Bus stop "Aéroport Promenade" is a 10-15 min walk from Terminal 1) / Saint-Laurent du Var / Cagnes sur Mer / La Colle sur Loup / Saint-Paul. The bus will bring you to the bus stop in the village of Saint-Paul de Vence, from where you can either take a taxi (if you have heavy luggage) or simply walk down the hill to Orion (a 20 minute walk).

King Louie and Mowgli is within walking distance to the quaint medieval village of Saint-Paul-de-Vence which is situated in a region that is teeming with tradition and history.

Therefore, there are numerous museums guests can visit in the area such as the locally known La Fondation Maeght à Saint-Paul de Vence, the Picasso Museum in Antibes, and the Le Musée d'Art Moderne à Nice – to mention a few.

In addition to those noted places, there are also various festivals guests can take part in like the Le Festival de Cannes, the Les Concerts du Cloître in Nice, and the Juan-les-Pins Jazz Festival.

So for those who are fond of sightseeing and getting a taste of local French culture, this is the place to be.

However, if you are more inclined to go exploring, you can visit nearby national parks – such as the Le Parc National du Mercantour and the La Réserve des Monts d'Azur among many others –  and indulge in exciting outdoor activities like canyoneering.

But if you only wish to relax, you can simply hang around your treehouse or check out the eco-friendly spa on the grounds. In there, you can get a massage, keep warm at the sauna, or swim in the pool.

Hi! My name is Aina & together with my mother Diane I run Orion B&B - a Bed and Breakfast with 4 treehouses surrounding an emerald green natural swimming pool in the valley of the beautiful medieval village of Saint-Paul de Vence.
We're committed to making your holiday in the South of France one to remember!
Croissants, homemade granola, fresh smoothies or chia pudding topped with organic fruit anyone?

4 Reviews - Two Treehouses in One

Stayed here? Why not write a review?